By Houston History Magazine on March 26, 2015 in Business and Industry, Education, Houstonians, Museums, Other, Preservation 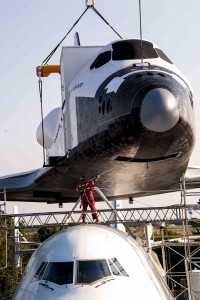 Thirty-one years after NASA launched the first space shuttle into Earth’s orbit, a shuttle carrier aircraft carrying the space shuttle Endeavour flew over Houston. In July of 2011, the shuttle Atlantis, STS-135, marked the 135th and final flight of the space shuttle program, known officially as the Space Transport System (STS). Just over a year later, while moving Endeavour  to its permanent housing at the California Science Center in Los Angeles, the shuttle briefly stopped in Houston en route. Endeavour ’s arrival reminded many Houstonians how, controversially, NASA administrators bypassed Houston as one of the cities chosen to house the three remaining shuttles, despite being home to Mission Control since the Gemini missions of the nation’s space program. Instead, Atlantis  came to rest at the Kennedy Space Center in Florida, the shuttle Discovery  went to the Udvar-Hazy Center in Virginia, an annex of the Smithsonian National Air and Space Museum, and shuttle Enterprise, which was built for testing purposes and never actually flew in space, was sent to New York City. 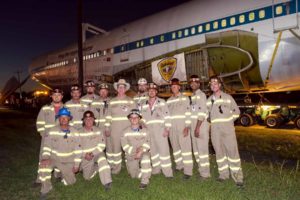 The Palletized crew that made the historic move of the shuttle and the 747 carrier to Space Center Houston.

While perhaps not as glamorous as the Apollo missions and moon landings, the space shuttle program allowed for a number of scientific discoveries and advancements in human space flight, and the craft remain visible reminders of our journeys into space. The conception of the space shuttle dates to 1969, and President Richard Nixon issued a proclamation launching the idea in 1972. The shuttle was envisioned as a practical tool to transport people, goods, science experiments, and equipment between Earth and what became the International Space Station—a place to conduct further research and study space. Throughout the 1970s, NASA scientists and engineers continued to develop and test the shuttle’s design.

In April of 1981, Challenger became the first space shuttle to launch and orbit the earth. The orbiters Columbia, Challenger, Discovery, Atlantis, and Endeavour flew more than 130 times, carrying over 350 people traveling more than half a billion miles, or more than enough miles to reach Jupiter. The Challenger and Columbia tragedies in 1986 and 2003 respectively brought the space program and the shuttles to the forefront of the nation’s mind and spurred investigation into the efficacy of the shuttle program. Originally intended to last a mere fifteen years, the program finally concluded after three decades of service.

Space Center Houston plans to open the exhibit in the summer of 2015. The New Space Center Houston exhibit will feature the mock-up shuttle Independence sitting atop the Boeing 747, in the “ferry position.” Both exhibit director Paul Spana and educational director Dr. Melanie Johnson agree that the Houston exhibit offers a unique opportunity. Visitors here will have a far more tangible, hands-on educational experience than those who visit sites housing the formerly active shuttles. They can explore the insides of the 747 and the shuttle itself and see what it would be like to pilot the shuttle, crammed into the pilot’s deck. Interactivity and the higher level of engagement make it far more likely that young visitors will take away something from the experience, perhaps inspiring a future astronaut who will set foot on Mars.

To the Red Planet and Beyond: The Mars Rover Celebration
The Legacy of Leland