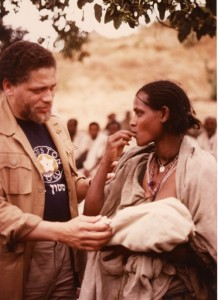 Mickey Leland. Houstonians with traveling experience will recognize the name of the international terminal at George Bush Intercontinental Airport (IAH). Houston residents familiar with downtown will recall the name on the federal building. Alumni from the University of Houston or Texas Southern University will also know the name. Unfortunately, many Houston residents, especially those who are new to the city or too young to remember him, will recognize Mickey Leland’s name but lack a thorough understanding of the former Houston lawmaker’s contributions. Leland dedicated his political career to caring for his fellow man at home and abroad, demonstrating the importance of helping those in need. In the process, he left a legacy of humanitarianism that remains a model for us today.

The Leland story began in Lubbock, Texas, where Mickey was born on November 27, 1944. When he was three, his father left the family, and afterward the two had little contact. At seven, Mickey received a bicycle from his father, a gift that represented one of the few interactions the two had before his father died when Mickey was twenty-one years old. Mickey, his mother, and brother moved to Houston’s Fifth Ward in the late 1940s.  His mother worked in a drugstore until she completed her bachelor’s degree and became a school teacher, setting an example for her sons.