By Houston History Magazine on March 26, 2015 in Communities, Houstonians, Preservation 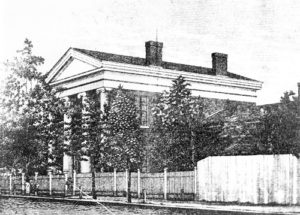 Sometimes the quest to find historical information becomes a story in itself, revealing a different history than expected. My research on Houston’s Quality Hill neighborhood began thanks to hints left in unlikely places: two turn-of-the-twentieth-century houses next to Minute Maid Park downtown (a strange juxtaposition visible from Highway 59) and the words “Quality Hill” and “Houston’s first elite residential neighborhood” dropped together in an article. Searching for more information and clues to solve the mystery, I imagined that I would eventually come upon a wealth of old, exciting documents that would provide a clear window into Houston’s past. But when I searched the keywords “Quality Hill” and found almost nothing, I realized things were going to get complicated.

Respected Houston historian Betty Chapman recommended the Houston Metropolitan Research Center (HMRC), part of the downtown Houston Public Library, as a place to look for evidence of the area. I went there hoping to find someone who could point me in the right direction, but even the HMRC staff questioned if I would be able to find much information. Two files specifically labeled “Quality Hill” mostly contained articles written about the area when it was being demolished.

A few names that appeared in the book Houston’s Forgotten Heritage, a thorough account of early domestic Houston architecture, helped jump-start my project. William J. Hutchins, Cornelius Ennis, William L. Foley, and Arthur B. Cohn all evidently owned houses in Quality Hill and had a significant impact on Houston’s early history. Files on all four of these men explained a good deal about their lives and legacies. While Quality Hill itself remained largely a mystery, a picture of what that neighborhood might have been gradually began to take shape.

Dawson Lunnon Cemetery
A Thirty Year Journey – But Not Over