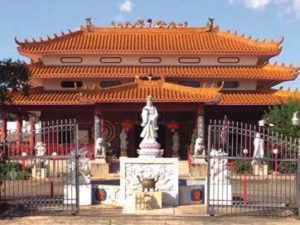 Visiting the Texas Guandi Temple is a step through the looking glass, a journey into a mystical world that invites a re-envisioning of self. Within the iron gates that surround the temple are statues of heroic figures, graceful goddesses, and temple dogs. Inside the temple are representations of gods set upon elevated altars where sticks of incense burn in giant brass bowls of sand and offerings of fruit await each god’s pleasure.

Texas Guandi Temple is a site for the practice of millennia-old religious traditions and celebrations, but it is also a testament to the sacrifice, survival, and heroism of earthly people who chose Houston as their home. Life inside and around the Texas Guandi Temple reflects the multicultural character of the United States and the diversity of Houston. It is both a community unto itself and a cultural site open to the city.

A large building with an elaborate exterior reflective of Asian ceremonial architecture, Texas Guandi Temple is surprisingly invisible in the sense that many pass by it on the I-45 northbound frontage road between Cullen and Scott, but few take notice. This is partly because the building sits back a block from the road and partly because those who do notice assume that it is a restaurant, similar in appearance to the nearby Kim Son Restaurant. An architect from China designed theTexas Guandi Temple, the largest temple in the United States dedicated to Guandi. Materials for the building and for the interior also came from China.

For those who venture inside the temple, an experience transcending religious beliefs and cultural assumptions awaits. Approaching the grounds, one notices the three-tiered roof laced with red and gold and the fire of dragon tongues. Immense double doors that feature fierce representations of Guandi invite visitors inside. Guandi’s importance is reinforced at the entrance to the temple, where his daunting figure stands on an altar higher than a man’s shoulders. 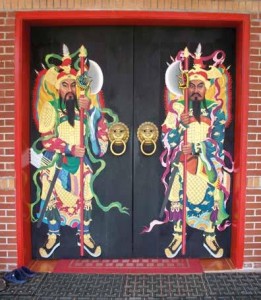 Long revered in Chinese culture and Taoist tradition, Guandi is a Chinese god, also known as Guan Cong, Guan Y, Kuan Ti, and Wudi. Guan Yu, a soldier and a general and perhaps a bean curd peddler in his early life, was a mortal man until captured and executed. After death, he became Guandi, and his popularity increased among the common people. In 1594, a Ming dynasty emperor canonized Guandi as god of war and protector of China and all its citizens.

Address of the temple