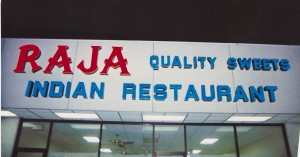 My wife, D’Arcy, had her birthday dinner at Bombay Sweets Restaurant in the Little India District of Houston in 2010. While driving down Hillcroft Avenue, we noticed new toppers adorning the neighborhood street signs proclaiming, “Mahatma Gandhi District,” complete with a small engraving of the revered Indian leader.

“Wait—when did that get there? Is this an official historic district now?” My search for answers to these questions formed the genesis of my doctoral    study at the University of Houston as part of the Gulf Coast Food Project in the Center for Public History some years later. This project, completed with five UH film students, resulted in an oral history project and film documentary on the making of Houston’s Mahatma Gandhi District, also known as Little India, that features merchants, community leaders, and Houston Mayor Annise Parker, discussing the history and significance of this district and the city’s Indian and Pakistani population. 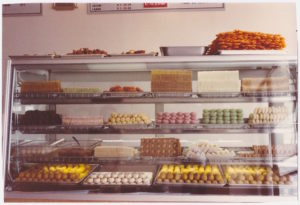 Geographically speaking, it is in Southwest Houston, near Sharpstown, outside the 610 Loop, inside Beltway 8. North to south along Hillcroft from Westpark to the Southwest Freeway; east to west along Harwin it is a triangular nook containing one of the largest South Asian populations in the Western Hemisphere. But if you were still unsure, look for the red-trimmed street toppers on the area’s major thoroughfares welcoming you to the Mahatma Gandhi District.

Welcome to Guandi’s Temple
From Gujarat to Houston