By Houston History Magazine on March 30, 2016 in Communities, Preservation 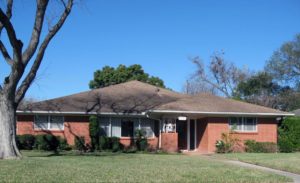 Builders simplified and mass-produced the ranch house in the 1950s. Also called a tract house or a rambler, this example has the popular hip roof with wide eaves and a prominent picture window.
Photo courtesy of Stephen James.

Houston is a vast city that spreads to the horizon in all directions. Gleaming commercial districts punctuate its sprawl, but the landscape is a blanket of residential neighborhoods. They define its architectural character. They tell us how and when the city grew.

Every urban area reflects the architectural styles that prevailed during the years of its greatest growth. The industrial cities of the Northeast and Midwest, which boomed in the nineteenth century, are known for their many neighborhoods of narrow row houses wrapped in picturesque brownstone, brick, or wood clapboard. Houston, less charming but more modern, is the ranch house city.

Houston is a new city, and its urban fabric seems remarkably homogeneous because so much of it was built over a relatively short period of time. Houston grew at a phenomenal rate during the decades immediately after World War II. Its population soared from 384,514 in 1940 to 1,595,138 in 1980. A booming economy fueled the growth, which city leaders guided through an aggressive annexation policy.

As late as the 1940s, Houston was a compact city of 75 square miles. Its boundaries extended no farther than Kirby Drive on the west, Brays Bayou on the southwest, and Sims Bayou on the southeast. The Heights, Rice Institute, and the new Texas Medical Center were on the edge of town. Today, this area defines the urban core, a central business district ringed by the city’s earliest suburbs. A 1947 land use map shows that most residential areas—highlighted in shades of gray according to density—developed on a grid pattern with small compact lots. An informal survey of these areas today shows that architectural types varied according to income. Prosperous neighborhoods featured brick homes of two stories, while one-story cottages and bungalows predominated in more modest districts. There were very few ranch houses within the city limits.

Nineteen forty-eight marked the beginning of Houston’s rush to the suburbs. On December 31, with the city’s first automobile expressway—the Gulf Freeway—under construction, the city council approved an ordinance annexing a large swath of territory that more than doubled Houston’s area to 189 square miles. With future expressways and future annexations, the city pushed rapidly outward and by 1980 encompassed 556 square miles.

Houston’s experience with suburbanization was not unique; it was a nationwide phenomenon. Significantly, however, 1950 to 1980, a time of explosive growth for Houston’s suburbs, were the years the ranch house dominated residential architecture. Thus the architectural character of much of the city is defined by the neighborhoods of postwar ranch houses, which cover a large part of its incorporated area.

The Bryan Museum: History in History
Home in the Pines: Creating The Woodlands