By George T. Morgan, Jr. and John O. King with Joseph A. Pratt 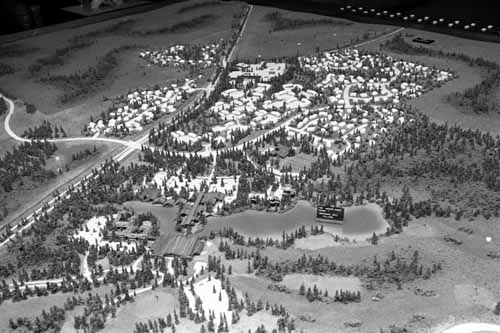 1973 scale model of The Woodlands courtesy of the Houston Metropolitan Research Center.

In my adult lifetime, I have watched Houston spread in every direction. People migrated to the region seeking jobs. The circles of highways around the city grew from one to three; the spokes in the wheel of freeways reached farther and farther out onto the flat prairie stretching toward Galveston, Freeport, Baytown, Sugar Land, Huntsville, Jersey Village, Katy, and other suburbs. New, affordable homes sprouted up along these roads, attracting more and more migrants to the jobs and the new neighborhoods that sprawled across the Houston metropolitan region. The Houston suburbs looked much alike, with the same stores, the same developers, the same interchanges and highway signs. But one major suburb, The Woodlands, remains somewhat distinctive.

Since opening in 1974 it has grown dramatically as a distant suburb where people can live and work without commuting daily to downtown Houston. It has partially fulfilled its aspiration to be an environmentally friendly place to live for people from all economic strata of life, with housing for the rich, the middle class, and those of low and moderate incomes. These early goals for The Woodlands emerged from its unusual past. They reflected the vision of Houston oilman George Mitchell—as filtered through the demands of the federal Department of Housing and Urban Development (H.U.D.), which seeks to address mounting shortages of housing for the poor and minorities. Although H.U.D. loans helped finance the early development of The Woodlands, its partnership with Mitchell Energy and Development soon soured. But even after H.UD. funding disappeared, The Woodlands, nonetheless, emerged as a vibrant center of population and business growth and a major city in its own right.

Mitchell’s ideas for building a new community reflected his own background. The son of Greek immigrants who worked their way up the economic ladder in the early twentieth century in Galveston, Mitchell grew up on the wrong side of the tracks. Imbued by his parents with a strong work ethic, a respect for education, and optimism about life, Mitchell succeeded in almost every endeavor he undertook. He paid his way through Texas A&-M by waiting tables and graduated with a degree in petroleum engineering. He proved to be an entrepreneur of the first class, using this knowledge, insight, and inner confidence to build a superior independent oil and gas company, Mitchell Energy. Although his historical claim to fame will be as the “father of modern fracking,” he also filled his life with a commitment to his large family and with good works ranging from a leading role in the restoration of Galveston to the financial support of Teas A&M, the University of Houston, and many other worthy causes.

Houston: Becoming the Ranch House City
Around the Region: Letter from the Editor