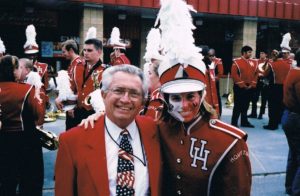 Legendary band director Bill Moffit with a member of the band. Photo courtesy of Rhonda Pitts.

The University of Houston marching band was founded in 1946. Any student could participate as long as they auditioned. Even in its early years, the marching band supported the Cougars at all football and basketball games, traveling to several away games. The band led the Frontier Fiesta parade and the first football parade, making its debut as a group that was ready and willing to serve its institution. This vigor has carried on and the Spirit of Houston continues to support the Cougars at football, volleyball and basketball games. The band also makes campus and community appearances to show support for the university. 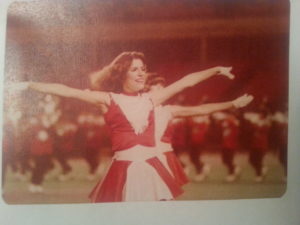 Initially, the band only consisted of wind players and percussionists. Now, the Spirit of Houston marching band has grown to include the cheerleaders, Cougar Dolls dance team, mascots, Frontiersmen, color guard and twirlers. Currently, the band is open to music majors and non-music majors, and no auditions are required. Although some people play in the band voluntarily, they have an option to enroll in the band for a one-hour credit. All band members receive grants for participating in football games and other city or campus events. Applications are not required; however, band members must be in good standing with proper attendance to receive the grant. The availability of funds is subject to change each year and determines the amount of money given to each student. The Spirit of Houston Alumni Association donates a big portion of the grant money. 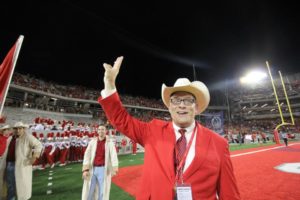 David Bertman, served as director of bands at the University of Houston from 2000-2016. Photo courtesy of Sammy Butts.

To read the PDF of the full article, click here.

For more information on the Spirit of Houston visit the following links:

Visit the the UH Spirit of Houston band website.

Below, watch a short film made for the Houston History class about The Spirit of Houston by author La’Nora Jefferson…

…as well as “The Band of Tomorrow, Today”  a footage compilation of the band under Moffit’s direction.

Clayton House: Profile of a Home and the Family who Built It
The Growth of the Latter-day Saints Church in Houston and Katy, Texas