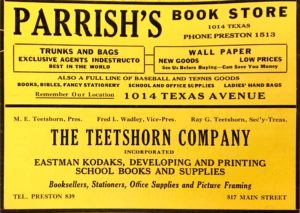 This advertisement displays the versatility of bookstores during the early 20th century, selling more than just books.

An often overlooked and swiftly fading part of our regional culture is the Houston bookstore. In the 1860s early bookshops in Houston were not only purveyors of books, but were also the main source of printing, news delivery, and music. But what has happened to the bookselling industry between then and now? Today Houston’s brick-and-mortar bookstores still provide a unique sensory experience, but the unluckiest of them come and go and leave little or no legacy. 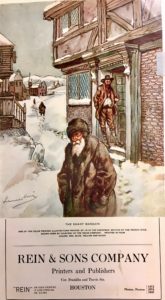 To separate themselves from the saturated printing and publishing market during the mid-20th century, Rein & Sons Company included these themed, attention-grabbing illustrations in their advertisements.

Over the past decade, the looming nature of the internet and the relatively unimpeded growth of players like Amazon have threatened bookstores across the country, pressuring them to adjust their approach to bookselling. Recent statistics from the American Bookseller Association show that print sales increased in 2015. September 2015 bookstore sales were estimated at $1.01 billion, compared to sales of $1.02 billion for the same period last year. This national trend will hopefully bode well for a Houston industry that has seen a trove of stores come and go throughout many generations. 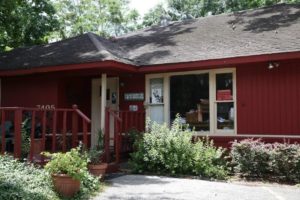 After they began selling books in 1988, Anne and Dan Becker sought a more stable selling environment. In 1993, they purchased the house pictured above.

Presently, the state of the Houston bookstore industry, while not exactly thriving, is as diverse as our population, catering to the needs of many cultures and subcultures. Salvaging the history of early bookstores in Houston is an interesting way to understand how culture, entertainment, and information proliferated in the city’s younger days through its transition to a megalopolis.

To take a closer look at Becker’s Books on their website.

In this short film, article author Aric Richardson discusses the beginnings of Houston Bookstores and the challenges they face in the information age.