The Alley Theatre Company’s concrete fortress on Texas Avenue reopened in September 2015 following its first major renovation. Studio RED Architects’ overhaul of the facility sparked accusation, argument, and eventual acceptance in print and online. Many of the improvements are unquestionably positive… 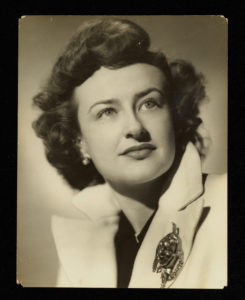 Picture of the Alley Theatre’s founder Nina Vance midway through her career.

Alley representatives had long been frustrated with the space’s inherent limitations and argued that the original design was short-sighted and underestimated the technical needs of postmodern productions. In a Houston Chronicle article on December 18, Gladden teasingly laid the blame before the feet of the person most responsible for the building’s original sins – not architect Ulrich Franzen or Hugo Neuhaus, the committee chair who selected Franzen, but the Alley’s first artistic director, Nina Vance: “There’s a rumor – I don’t know if it’s true – that Nina Vance never wanted to have touring shows to play in her theater. So she made sure that touring shows couldn’t come through…” 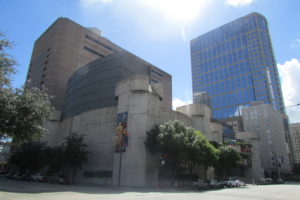 Currently Alley Theatre in its location on Texas Avenue in Downtown Houston.

This video by Houston History student Eric Broussard gives us a brief history of the Alley Theater and its founder Nina Vance.

Attention to Detail: The Architecture of Lucian T. Hood, Jr.
The Evolution of Houston Bookstores