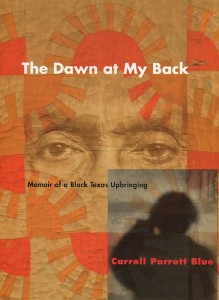 The Dawn at My Back: Memoir of a Black Texas Upbringing explores what it means to grow up in a racist society. It describes the injustices endured daily and vividly paints a picture of the pain they carry with them. Blue’s story demonstrates the power of racism to rip families apart, even as one consciously fights against the fear, violence, and oppression it generates.

Just ten days before the birth of her daughter, Carroll Ann, Mollie Carroll Parrott wrote a letter to her sixteen-year-old son, Frederick Douglass Parrott, Junior, who she had sent to Chicago so that he could graduate from an integrated high school—an opportunity she hoped would enable him to “move up in a racist world.” 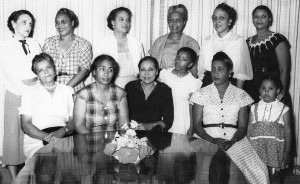 “My dear son,” my mother opens her letter. And so she begins instructions to my brother as to how he is to live his life. For her, academic degrees were the key to achieving a better standard of living. And age was not a factor to her continuing dreams of success. Shortly after my birth, she returned to college to obtain a master’s degree in special education. At the time, she was fifty years old, with me, a six-year-old, in tow. To the very end of her life I observed her becoming all that she extolled her son to be in her August 1943 letter to him. She taught the same values to me. How my mother lived her life became my greatest model.

“Now this is self improvement,” she tells him. Diligently, she maintained a lifelong record of the same quality of self-improvement and community activism that she describes as a pathway to her son in this letter to him. Over time, my parents did achieve a modicum of success. They enjoyed a certain quality of status as professionals and community leaders in Third Ward, one of Houston’s Black neighborhoods. Yet their rugged, tough love brand of optimism faced what to this day seems to me to be eternal obstacles. I do believe the challenge was too great for them. The story of their struggle seems to have disappeared with their deaths. For this reason, I am compelled to rite our story. . . .

[My mother’s] biggest challenge was to make the best of her life in a deeply embedded racist environment. The world surrounding her life had been so assuredly arranged to destroy her spirit. In time, the multiple rejections daily visited upon her conspired to take their toll on her zest for life. Her justified anger at these inequities had no where to go but inward.

“Yes, Fred, there is segregation in Chicago—there is segregation or discrimination either by word, sign or action all over the United States.” My mother’s letter to her son reveals her anguish over the eventual effects of racism on her child. Her fear of its power forced her to expel her sixteen-year-old boy from her Houston home and send him to the North. In Chicago she felt that he could learn first hand about white people.