By Houston History Magazine on December 2, 2011 in Letter from the Editor, Race & Ethnicity 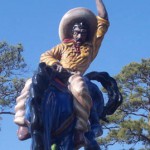 Two years ago I began conducting interviews for the University of Houston’s Oral History of Houston project under the Center for Public History. Ernesto Valdés, the director of the project at the time, asked me to interview people in Magnolia Park, a historic neighborhood on the verge of celebrating its centennial anniversary and populated in large part by Mexican Americans. I am not a native Houstonian, and my only knowledge of Mexican American history in the city came from Arnoldo De León’s book, Ethnicity in the Sunbelt. These interviews served as my introduction to the Mexican American experience in Houston and contributed immeasurably to my personal and educational growth.

Many of the interviews I conducted gravitated towards issues of politics in some form or another, and I heard some stories repeated from person to person without prompting them. For example, the Joe Campos Torres case came up repeatedly in interviews. People almost without exception also made note of Ben Reyes with a combined sense of what could have been and a respect for what was accomplished. The major “firsts” achieved by Mexican Americans in Houston politics stood out as another commonality of these recollections: the first Mexican American elected in a citywide campaign (Leonel Castillo, Controller), the first Mexican American Justice of the Peace (Judge Armando Rodriguez), and the first Mexican American police officer (Raul C. Martinez).

The story behind Raul Martinez’s entrance into the police academy begins with the exclusion of Mexican Americans from law enforcement based on claims that they did not meet the height requirements. So when community leaders identified a couple of tall Mexicans interested in joining the academy, they pressured city officials to allow them to apply. Raul C. Martinez was one of these young men and stood over six feet tall. This story forms part of the collective memory of Mexican Americans in Houston. It is a story of discrimination and exclusion, but also a source of pride in breaking barriers through cooperative work and deliberateness poured into achieving each of these firsts. The city recently witnessed another first, the election of the first Mexican American Sherriff in Harris County, Adrian Garcia in 2008.

Doing interviews is an incredibly personal and rewarding experience. Through the process, people invite you into their lives and share intimate stories that strung together define their lives and their roles in society. As a result of the connections made during interviews, people often invited me to events so that I could truly understand the community they described. This is how I came to sit in on a sing-a-long of Mexican classics led by Judge Armando Rodriguez for Mexican and Mexican American seniors at a community center. I also had the privilege of attending an opening brunch for Fiestas Patrias, which I discovered included a who’s who of Mexican American community leaders and consequently an event where politicians introduced themselves to gain support of Mexican Americans. One summer I received an invitation to Christmas in July at Ripley House that included my first glimpse of Pancho Claus. I went on tours of Ripley House and the Denver Harbor Clinic, gaining an appreciation for the various services offered to the community. As a result of the oral history interviews, I learned about Macario Ramirez’s altars created for Dia de los Muertos in his store on 19th Street. It is also how I found myself attending two days of bingo with the abuelitos group at Our Lady of Guadalupe and a follow-up invitation to have Carmen Ramirez’s nopalitos at the church breakfast the following Sunday. Together these events along with the personal narratives collected in the interviews create the story of my Mexican American experience in Houston.

During that first summer of doing interviews, Ernesto and I often sat to debrief, which for him involved reminiscing and contextualizing the story. Ernie, as he was known by his friends, was a long-time activist who both witnessed and participated in much of the history I collected. For me, these conversations provided an opportunity to reflect with appreciation on the accomplishments of Houston’s Mexican American community past and present and to discuss the complexities of culture, identity, and political maneuvering. Ernesto died in 2010. For him, this issue was a long time coming—as it is for the community reflected in its pages.