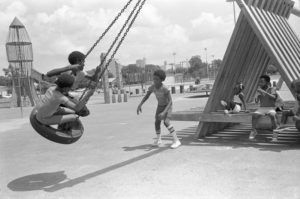 During the summer between second and third grade, I fell hopelessly in love with cotton candy. That delicacy excelled as the most perfect experience in my then eight-year-old world. Watching it being made, then touching and finally tasting it was mesmerizing. The notion that a machine could spew out pink strands of sugar fascinated me. I recall the stickiness between my fingers as I snatched at bits of fluff from the huge ball of its sweetness. I remember these pink fluffs turning into red shards that I eagerly stuffed in my mouth.

I was at a carnival on a hot summer night in Houston’s Emancipation Park when I met cotton candy. Because I loved everything about that first bite’s memory, I also fell in love with hot summer nights, the carnival, and the park.

Cotton candy was a ruse that summoned me in search of its sweetness to also partake of the park’s other delights. I learned how to swim in the giant pool, to eat hot spicy barbecue and ice-cold watermelon at church picnics, to bring pastel colored wrapped gifts to my friends’ birthday parties, and to proudly pass the park on my way to St. John’s Baptist Church on Dowling Street in Easter outfits that signaled my growth from flat-chested kiddy tops to bras underneath sleek junior miss dresses.

As life diverted my attention elsewhere, I forgot about the park. When I returned sixty years later in 2009 for the park’s 135th birthday, I was open to learning what it had taken to allow a little eight-year-old Black girl to love her first bite of cotton candy. The answer, I discovered, was inside the far-sighted and determined intent of four former slaves. In the nineteenth century, the four exhorted a community to sacrifice a collectively hard-earned $1,000 to buy ten acres of land so that all of Black Houston could celebrate into perpetuity the Emancipation Proclamation on June 19, or Juneteenth, in honor of that fateful day in 1865 when Texas slaves finally learned that they were free.

Moody Park: From the Riots to the Future for the Northside Community
SPARK PARKS Spark the Imagination