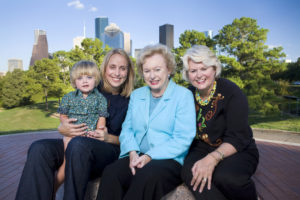 Although Houston may be known for its many cultural and art museums, the handiwork of local artists can also be found in a not-so-usual location – school and neighborhood SPARK Parks, which grew from one woman’s inspiration.

In 1979, Eleanor Tinsley beat a twenty-year incumbent and became the first woman elected to Houston City Council as an at-large member. During her tenure, she pioneered dozens of landmark ordinances and projects including:  The Houston International Initiatives, the Houston READ Commission, The Houston Archaeological and Historical Commission, the 9-1-1 Emergency Network, the ordinance requiring children under eighteen to wear bicycle helmets, the smoking restriction ordinance, the W-A-T-E-R Fund, which helps pay water and sewer bills for the city’s elderly and impoverished, and the adoption of Houston’s sign ordinance.

Tinsley also helped develop and implement the SPARK School Park Program. In 1983, Houston needed 5,000 acres of parkland to compare favorably to other cities. The mayor and county judge-commissioned a Green Ribbon Study to investigate how to increase Houston-Harris County’s park space. Council Member Tinsley gave the report to a summer intern who highlighted the suggestion to “make use of public school grounds.”  The rest is history.

Emancipation is a Park
Our Treasured Oasis: Preparing for the Hermann Park Centennial