By Houston History Magazine on November 26, 2012 in Arts & Culture, University of Houston 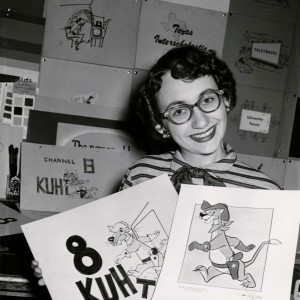 In 1951, UH President Dr. Walter Kemmerer brought another visionary concept to the university, a proposal for an educational television station. The University had already launched the nation’s first university-licensed radio station, KUHF-FM, in November 1950 to provide courses in radio communication, but expanding that concept to an entirely new technology was a bold move for the youthful institution. The University’s intention became firm on April 17, 1951, when it approved and sent an application to the Federal Communications Commission (FCC) for a television permit. On April 15, 1952, the University’s Board of Regents approved a resolution for a joint application with Houston Independent School District (HISD) to secure an FCC “construction permit” for Channel 8. The commission granted that license, and KUHT-TV went on the air May 25, 1953.

To fully appreciate this accomplishment a general familiarity of television history is helpful. The United States had not taken its first tentative steps into commercial broadcasting until the mid- to late-1920s. These basic steps generally in the New York area, however, represented merely a starting point. The adoption of technical standards, the Great Depression, and a lack of willing participants in this business limited the television industry’s expansion. It suffered another set-back with the United States’ entry into World War II. This time period saw the NBC, CBS, and Du Mont networks limiting their schedules to four hours per week, while utilizing their manpower, equipment, and expertise for government service.

Watch the collaboration between Houston Public Media and the Center for Public History as they discuss the 100 years of Houston History, an episodic series featuring KUHT in Episode 3, highlighting the University of Houston’s trailblazing innovations in regards to distanced learning.

The Campus was our Country Club
The Tip of the Spear: Honors Education at UH