By Houston History Magazine on July 12, 2013 in Houstonians, Parks, Preservation 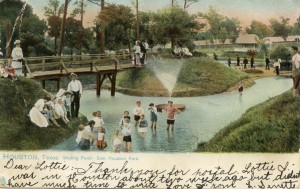 Houston used the legacy of the land to encourage settlement,  bringing in a great multicultural mélange of settlers that left a lasting impression on the state. An early Mexican land grant to John Austin in 1824 led to a far-reaching development plan and the founding of a new city on the banks of Buffalo Bayou. In 1836, after the Republic of Texas
won its independence, brothers John Kirby Allen and Augustus C. Allen purchased several acres of this grant from Austin’s widow, Mrs. J. F. L. Parrot, and laid out a new city.1 They named it Houston.

The growth of Sam Houston Park, originally called City Park, has always been closely related to the transfer of land, particularly the physical and cultural evolution of Houston’s downtown region that the park borders. Contained within the present park boundaries are sites acquired by the city from separate entities, which had erected private homes, businesses, and two cemeteries there.

Southwest Conference: The Good, the Dirty, the Greed
The Romance of Absolute Truth