By Debbie Harwell on November 20, 2013 in Arts & Culture, Houstonians, Music 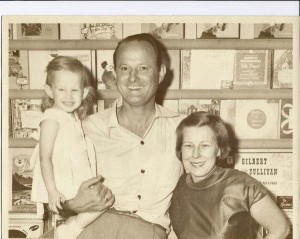 My newlywed parents came to Houston at the end of World War II with $150 to open a record shop.  A former railroad employee, my dad, Frank Zerjav, hailed from Pittsburgh, Pennsylvania, and had served as a master sergeant in the Air Force; my mother, Irene Freeman, created department store ads before going to work for a colonel at Goodfellow Field in San Angelo.  They fell in love driving around the base listening to their song, Bob Will’s “New San Antonio Rose,” and other Texas swing hits. I suppose that made getting into the record business a logical choice after they married—he had experience in purchasing, she had experience in sales, and they loved music and people. Two of my mother’s sisters already owned businesses in Houston—Baker’s Beauty Supply and Barbour’s Opticians—so my parents, like many who flocked here after the war,  felt confident the city offered them a shot at the American dream.

They found a spot at 2053 West Alabama at Shepherd, in between a liquor store and Burger Bar, catty-corner across the street from the Alabama Theater. Opening in December 1945, they called their place the Jive Hive and sold Christmas trees in the parking lot to help make ends meet. Before long the business grew with their reputation for customer service and carrying the latest hits.  In 1948, my dad took advantage of the G.I. Bill and enrolled in classes at the University of Houston where he learned to repair radios and record players to expand their services. In 1952, I was born and took up residence in a playpen in the back of the shop—that is until I learned to remove the slats and toddle to the front where I gained an appreciation for all kinds of music from Offenbach’s Gaîté Parisienne to “Hound Dog” (1956) and “The Chipmunk Song” (1958). It was a happy time.