A Conversation with Pe-Te Johnson and Jason Theriot 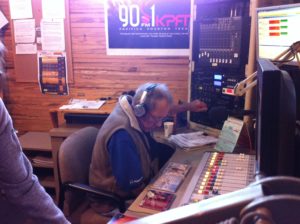 Pe-Te Johnson was born in Grand Taso, near Eunice, Louisiana. His ancestors are direct descendants of the Acadians expelled from Nova Scotia in the mid-eighteenth century. His last name, Johnson, is the Anglo version of his Acadian sir name, Jeansonne. He served in the U.S. Air Force during the Korean War and was stationed in Chateauroux, France for two and a half years, having served as an interpreter when the military opened a new base there in 1953. He did his first radio show at the V.A. hospital in Alexandria, Louisiana, in the early 1950s. After completing his service, Pe-Te moved to Beaumont in 1959 and worked at Wyatt’s Cafeteria until he transferred to Houston in 1961. Later, he became an inspector for the Arco Petrochemical Plant where he made more money selling barbeque sandwiches for lunch than his job paid. In 1979, he opened Pe-Te’s Cajun BBQ House across from Ellington Field in Friendswood. The restaurant and dancehall remained a favorite of pilots, astronauts, cosmonauts, celebrities, Cajuns, and non-Cajuns alike until it closed in 2005. Even though the restaurant kept him busy, Pe-Te accepted an offer to start a local Cajun music radio show at KTEK in 1981. Two years later the program moved to listener-supported KPFT, and this year he celebrated his thirtieth year as the host of “Pe-Te’s Cajun Bandstand,”, which he does as a volunteer service. He has been arguably the most influential public figure in promoting Cajun and Zydeco music in the Houston region. The following excerpts are from a conversation between Jason Theriot and Pe-Te Johnson on May 30, 2009.

To read the pdf of the full article, click here.