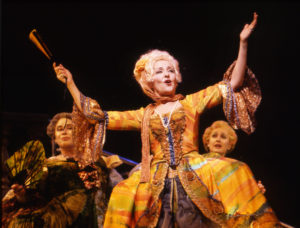 When most people think of opera, a blonde woman—traditionally overweight—wearing a helmet adorned with horns comes to mind. While the Houston Grand Opera (HGO) is familiar with Richard Wagner’s works and producing a long term project of the Ring Cycle in which this stereotypical woman appears, the young opera company offers its city a much more modern taste of the fine arts. HGO began as a regional company that only produced two shows a season and steadily gained notoriety until its continuous expansion called for a new venue: the Wortham Center. Constructed specifically to house the opera and the ballet, the Wortham Center offers Houstonians a cultural hub that hosts a plethora of social events. Through the efforts and support of a handful of dedicated patrons, the Wortham Center came to fruition, putting Houston on par with its East and West Coast brethren. Moreover, this enterprising spirit of Houston pervades the Houston Grand Opera and catapults it ahead of its competition through innovative methods of management and design.

During the seventies and early eighties, the Houston Grand Opera seemed very young compared to its earlier-established counterpart in the arts, the Houston Symphony Orchestra. Both the opera and the ballet coexisted with the symphony in Jones Hall, adapting to a stage not quite suited for the more physical performances of dance and musical theater. The number of shows per season grew from the initial two of Salome and Madame Butterfly, to five and six and even seven.

Booking an evening at Jones Hall became a major issue, as the three arts companies battled for prime performance dates. Social events vied for the location as well, putting even more stress on the strained venue. Rehearsal time became difficult to schedule. The ballet found more performance opportunities outside of Houston than inside. National companies had to bypass Houston on their tours. Non-subscribers to the opera were unable to get tickets, as HGO was already oversubscribed. All of these factors stifled audience growth, and the idea for a new space to house the opera and ballet became inevitable under these conditions. The question remained whether or not the establishment of the individual companies was strong enough to support the new theater. To read the pdf of the full article click here.

Watch a short film on the Wortham Center and Houston Grand Opera.