My grandfather Yuen Yee Chan arrived in the United States in 1880 and worked for a company supplying food to Chinese railroad workers. He returned to China after the death of his first wife and brought his new wife, Yee Shee (Luk Oi), to California in 1908. My father, Edward King Tung Chen, was born in San Francisco on November 30, 1909. He graduated from Lincoln High School in Los Angeles, attended Columbia University, and was the editor of a Chinese language newspaper. He came to Galveston in 1932 as secretary to the first Vice Consul of the Republic of China for the Southern United States. He married Janie Ng (1911-1965) in 1934, and they had two children, Margaret Fay Jane Chen Sham (1935-1989) and me. 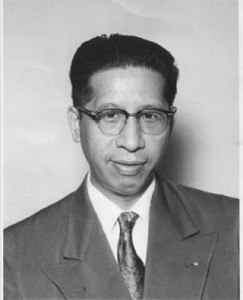 E. K. T. Chen spent half his life a Texan and died a patriot in Washington, DC, on October 16, 1957, while preventing Chinese internment during the Korean War. This is the story of the extraordinary things accomplished by this ordinary son of Chinese immigrants that benefited all Americans, and my efforts to continue his legacy. Born in 1937, I am the oldest native-Houstonian American Chinese male still in Houston. I prefer the term “American Chinese” because I am an American first.

First officers of the Houston Lodge of the Chinese American Citizens Alliance.