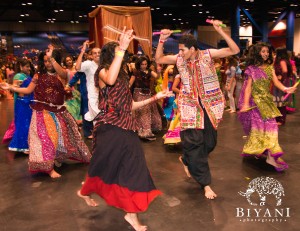 Walking into the George R. Brown Convention Center for the Navratri festival, I am whisked away by the South Asian culture – the vibrant colors, the smell of Indian food, the garba music, and conversations in my native tongue. Waiting in line to purchase tickets I look over the ledge and see my fellow South Asian Americans on the main floor starting the traditional garba dances around the statue of the Goddess Durga. They are barefoot out of respect for the goddess. My family finds a good place to sit and keep our belongings, including our shoes, for the rest of the night. It is 9:00 p.m. on a Friday night, and the festivities have just begun.

The aerial view of Navratri is mesmerizing. Rings of dancers rotate counterclockwise within rings of other dancers. In an energetic repetitive routine, spinning, raising their arms, hopping, and dancing with joy. In the final dance known as a raas they use sticks when making contact with their partners. Men, women, and children participate in these dances, which to an outsider may seem crowded and chaotic but is actually very organized with the younger crowd dancing to the center.

A kaleidoscope of colors can be seen in the variety of outfits and their designs. The women traditionally wear saris or chaniya cholis, which are three-piece dresses that have a blouse and flared skirt adorned with beads, jewels, mirrors, and embroidery. Men typically wear sherwanis, long-sleeve tops that stretch far below the knees over pants. 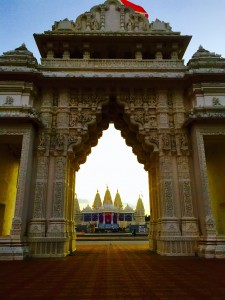 If people can pull themselves away from the excitement of dancing, the food satisfies every Indian craving, including the popular appetizer samosas; more traditional foods such as pav bhaji, gravy eaten with bread; and papdi lot, spicy dough made from rice flour. Pizza and nachos cater to the younger generations.

After hours filled with dancing, exhausted families go home and rest up to repeat the celebration the next evening. Navratri happens once a year, usually at the end of September or the beginning of October depending on the lunar cycle. The festival lasts for ten days and is celebrated for its duration in the local temples and at the George R. Brown for two weekends. This festival is celebrated in honor of the Goddess Durga, who emerged victorious in a battle against evil that was fought for nine days and nine nights. The nine days also represent her nine forms.

Click here or on the image below to watch the companion video produced by author Roshni Patel.

Pass The Naan
The Pinoys of Bayou City