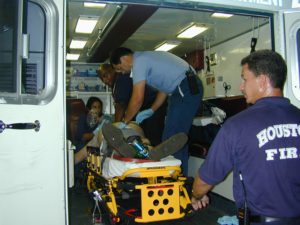 Cardiac arrests take up to twelve HFD personnel to do CPR and advanced life support. Photo courtesy of Diana Rodriguez.

When Houston began its ambulance program on April 10, 1971, it became a trailblazer in emergency medical services,
responding to the 1966 recommendations of the Committee of Trauma and Committee on Shock in the Division of
Medical Sciences of the Academy of Sciences National Research Council (NAS). However, not all of the NAS suggestions could be implemented immediately in Houston or other cities, such as the nationwide 9-1-1 system. In addition, the Harris County Medical Society (HCMS) remained unhappy with the “negligible survival rate” for out-of-hospital cardiac arrest cases, which exceeded 1,000 annually in Houston in the early 1980s.2 More had to be done; and today, Houston Fire Department Emergency Medical Services (HFD EMS) Assistant Chief David Almaguer points out, bringing cardiac arrest patients back to life is the hallmark of the department.

Check out more information about the Portable Medical Status and Treatment System.

…and the department’s special operations group.

The impact of HFD’s medical director, according to Tom McDonald, has not “bettered” care, it has “focused” it.

Tom McDonald defines the roles of paramedics and EMTs.

Richard Sadler remembers his training in the 1970s.

Richard Sadler remembers “you stick him, and he sticks you.”