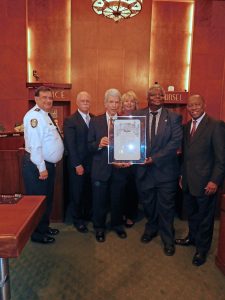 The Houston Fire Department Emergency Medical Services (HFD EMS) has pioneered emergency medical
protocols, leading the way for departments across the country, but behind the history are the individuals who stand ready every day of the year to help Houstonians, no matter what their emergency or what time of the day or night. Rodney West, who became the acting Fire Chief in 2016, emphasizes, “The greatest resource of the Houston Fire Department are the people who work here. We have amazing people and a lot of them came for the same reason I did, because they wanted to help people.” 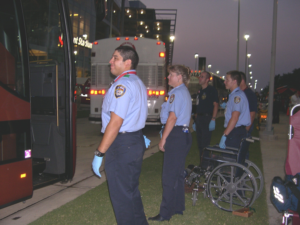 Few of us outside the profession can truly comprehend the nature of the heroic work – our term not theirs – that EMTs and paramedics do on a daily basis. Therefore, it is important to remember they carry the stories of their experiences with them for a lifetime. The Welcome Wilson Houston History Collaborative began recording oral histories with a group of HFD EMTs, paramedics, retirees, and department leaders in February 2016 to preserve the previously undocumented history of Houston EMS. Some accounts were heart wrenching, some comical, and others were stories of affirmation, but all were told with humility and gratitude for having had the chance to make a difference in even one person’s life.

Check back later to watch videos of interviews conducted for this story.

A 1971 rail care fire described in the article is shown in the above Youtube clip. Two cars exploded and killed firefighter Truxton Joseph Hathaway Jr. and injured V.E. Rogers and Andy Nelson.

An excerpt of Assistant Chief David Almaguer’s interview with Houston History discussing his experiences with HFD-EMS.