By Houston History Magazine on December 8, 2016 in Business and Industry, Health and Medicine, Houstonians, Military and War, Politics 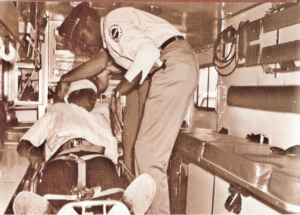 In the wee hours of the morning, dispatcher Bill Hausinger’s voice crackled over the radio at Station 19. “Okay, I got a woman about to have a baby at 1818 Brackenridge,” he said, quickly dispatching Glen Morris and Otis Owens to the woman’s home. “You got it? You got it? Okay,” Hausinger confirmed before asking, “What? What?” and then replying with urgency, “Time is 0-0-30. All right. I’ll give you the time later! Just get to 1818 Brackenridge!” With that order, the call ended, marking the birth of Houston EMS thirty minutes after midnight on April 10, 1971. 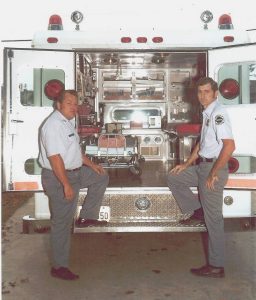 Houston EMS personnel recall stories of an auto accident on a Houston roadway, most likely on Westheimer near its current intersection with Loop 610. Two ambulances arrived at the scene to find one person dead and another badly injured. The two men who worked for separate private companies, believed to be funeral homes, fought over who would take which victim. The winner emerged with the corpse and the loser the injured. Less than fifty years ago, this scenario characterized emergency care in Houston and in many cities across the United  States. People died from accidents and medical emergencies because uninterested parties provided half-hearted emergency care in the field, with 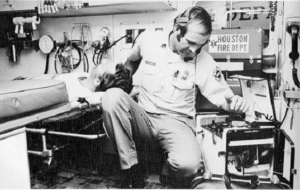 out proper training or equipment.

By the late 1960s and early 1970s, however, consolidated emergency medical services, often run by local government agencies, emerged as a solution to the problem. With city leaders supporting the implementation of emergency care under the Houston Fire Department (HFD), Houston soon became a national leader in setting protocols and in quality of care, a standing it continues to hold today.

David Almaguer discusses the importance of action within the first moments of a medical problem and the “chain of survival” afterwards.

In his interview with Houston History, Tom McDonald spoke of the legacy of Chief Whitey Martin.

Below, Mike Ivy and Tom McDonald retell the story of EMS’ foundation in Houston.

Houston Setting the Standard for Emergency Care
Letter from the Editor