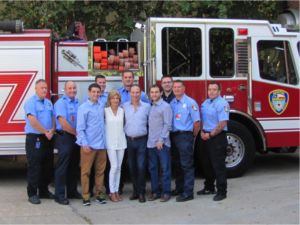 The HFD 9-1-1 calltaker gave CPR instructions and Bob’s wife keeps him alive until HFD arrives and takes over CPR and advanced life support. The Diamond’s used this photo for their holiday card last year!

When someone calls 9-1-1 in Houston, Houston Fire Department EMTs and paramedics respond quickly – and there is hope.

Dr. Paul Pepe, who became Emergency Medical Services (EMS) director in 1983, realized how much it boosted the morale of HFD members to see a patient they previously resuscitated say, “thank you!”  When Dr. David Persse took over as EMS Director in 1996, he took this a few steps further. 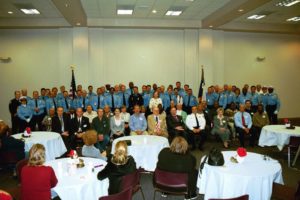 Twenty-five cardiac arrest survivors and their rescuers in the John P. McGovern Museum of Health and Medical Science on November 20, 2003. Sponsored by Medilife of Houston.

As a result, several times a month, reunions take place between survivors (or “saves”), HFD rescuers, and all who assisted them in saving a life. In Houston, all cardiac arrests are tracked, and cardiac arrest survival is an internationally recognized indicator of EMS agency performance. The survivors are also a testament to the training and dedication of HFD members to their craft of saving lives. 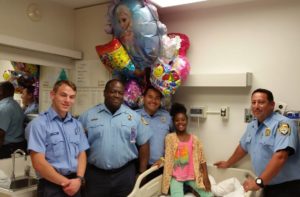 Antonesha Roberson was on vacation in Houston and became a near drowning victim. Last time these HFD members saw her, she had been pulled from the bottom of a pool with bystander CPR by a flight attendant. This child was unresponsive and not breathing. A week later, she was being discharged home and returning to Louisiana. 2015

Some cardiac arrest survivors and their families insist on reuniting with HFD heroes who answered their 9-1-1 call. Many express how grateful they are to the 9-1-1 calltakers who calmed them down and helped them perform CPR (cardio pulmonary resuscitation), when moments before they were frantic. They say that the moment they heard the sirens outside their door, they felt relieved that the finest pre-hospital care was at their disposal.  They recount a loved one not breathing, without a pulse, and eight to twelve EMTs and paramedics working feverishly to resuscitate their child, parent, spouse or friend. 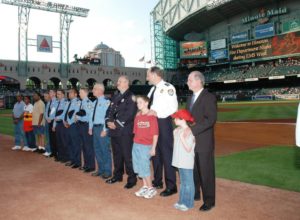 Mr. Ed Smith is a local typewriter repairman who collapsed in his shop. A bystander did CPR and crewmembers from HFD helped resuscitate him. He was the first cardiac arrest survivor reunion celebrated with then Fire Chief Boriskie and Dr. Persse during a pre-game at an Astros game for National EMS Week 2005!

For over a decade, HFD EMS Patient Liaison Patricia Hilliard has contacted survivors when they are discharged from hospital to follow-up and offer them a reunion.  Scheduling these events involves coordinating with multiple firefighters’ 24-hour shifts, the HFD physician on-call, bystanders, and the 9-1-1 calltakers.  Often HFD members are pleasantly surprised to hear the critical patient they did not expect to live has survived! 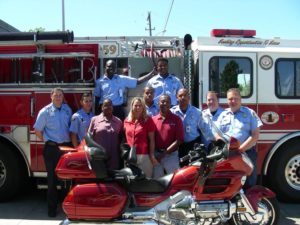 Wayne Revis, back on the motorcycle just weeks after his cardiac arrest, thanks to 9-1-1 calltaker who gave bystander CPR instructions to his wife and the HFD team that resuscitated him! 2007

With the logistics arranged, the patient and family members meet each other at a designated fire station. Dr. Persse usually emcees the reunions and extends his appreciation to the survivor and family for coming to thank HFD.  While reliving the worst day of their lives, patients and family members share lots of hugs and often tears of joy with their team of heroes.  Each firefighter, calltaker or layperson who was a link in the Chain of Survival receives a printed commendation. Pictures are taken in front of the responding HFD apparatus and printed on the spot for each hero.  The local media often covers these heartwarming reunions.  For HFD members these sincere thanks from the families are rare, yet one of the most important rewards they will ever receive for a job well-done. 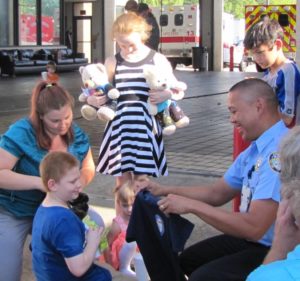 After becoming dehydrated from a chronic condition, Mom was holding Andrew Sprague in her arms but he was suddenly not breathing. The family called 9-1-1 and started CPR with the calltaker’s help. A few minutes later a dozen HFD members took over, performing advanced life support. Andrew was in a coma for approximately a week and the family was prepared for the worst. He has now recovered 100%! 2016

Even when a person is unable to survive a life threatening emergency, some families request a reunion to extend their deepest gratitude to the HFD team that “put their hands on my loved one.”    What they witnessed still comforts them as they recall with amazing detail, the actions of HFD members. As one relative explained, “Everyone was trying so hard, but we know it was just her time.” Many times, family members describe how their loved one survived for a few more hours or days, giving them precious time to gather their family and hold their loved one’s hand, pray or say goodbye.  Those last moments that HFD gives them mean so much to these grieving families.

Although the countless reunions HFD EMS has hosted far surpass the space available in this magazine, the ones featured here illustrate that every call is different and every patient is different, but the gratitude of patients, their families, and HFD members for these opportunities to be reunited remains a constant. 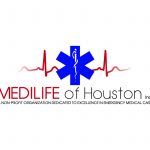 Medilife of Houston works to promote safety and emergency medical services and has also sponsored and organized many of the HFD EMS reunions.

Check back later for more pictures, news video and stories of lives saved.