By Houston History Magazine on November 14, 2017 in Archives, Arts & Culture, University of Houston 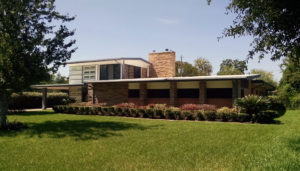 As an associate in the office of Phillip G. Willard, Lucian T. Hood designed this modernist Riverside Terrace marvel in 1953.

The University of Houston architecture program was in its infancy in 1952 when it graduated only a handful of students. Yet two of them—Kenneth E. Bentsen, FAIA (1926 – 2013) and Lucian T. Hood, Jr. (1916 – 2001)—went on to have extremely successful careers. Bentsen worked exclusively for commercial and institutional clients and produced award-winning buildings for banks, hospitals, and universities. His best-known project was the Summit (1975), a professional basketball arena for the city of Houston.

Hood, however, focused mainly on residential architecture. At his peak in the 1980s, he had one of the most successful residential design practices of any Houston architect. Although he did most of his work in Houston, clients came from other cities in Texas and neighboring states. After he retired, others continued his work, offering Lucian Hood designs to those who associated his name with fine design and high quality.

Designing large, expensive homes maintained Hood’s clientele of wealthy and renown business-people. Such is the case with this vast, ranch-style home built and designed for Houston businessman Marvy A. Finger and family.

His career spanned the modernism of the 1950s to the conservatism of the 1980s. His modernist buildings showed his intuitive command of both composition and principles of line, texture, and contrast, but the high quality of his work…

To view more of Lucian T. Hood’s designs scroll down.