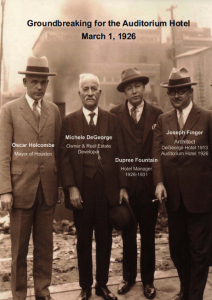 Some of Houston’s most iconic structures, including the Gulf Building, theaters such as River Oaks Theater, and City Hall are products of architectural trends known collectively as both art deco and moderne. One of the first and most prolific Houston architects of these styles, a Jewish immigrant named Joseph Finger, helped change the face of Houston through his trendsetting architecture.

To read the entire pdf of this article, click here.

Scroll down to watch the movie, Joseph Finger, Moderne Architect,  listen to excerpts from an interview with Rice professor Stephen Fox about Joseph Finger’s career and legacy, or view images of the demolition of the Ben Milam Hotel, the only Finger-designed Houston hotel building not still in use.

Click on the arrows below to listen to excerpts from Josh Levine’s interview with Stephen Fox, conducted at Rice University on November 2, 2012. Fox, a Rice University professor of architectural history with a local focus, discusses the life and works of Joseph Finger, one of Houston’s first modern architects.

Fox analyzes the design of Houston’s City Hall, one of Finger’s most enduring legacies. He discusses the building’s features, materials, and design influences seen both inside and outside.

The 1940 Air Terminal building represented another opportunity for Finger to present Houston as a contemporary city.

On December 9, 2012, the Ben Milam Hotel was razed to make room for a high-rise condominium across the street from Minute Maid Park. It represented the only Finger hotel in Houston that had not remained in use. 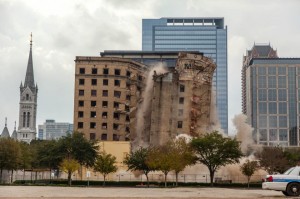 Brian Scott took this photo of the Ben Milam Hotel as it began to crumble – another lost piece of Houston history. 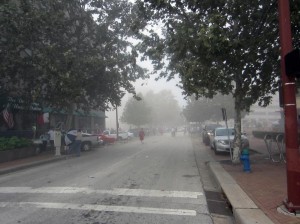 This image by Amanda Bruce shows the aftermath as the dust began to settle on downtown.

Click image below to see the video of the Ben Milam Hotel demolition taken by Lauren Meyers. You can also visit her webpage, http://www.arch-ive.org/archive/ben-milam-hotel, which has many interesting facts about the hotel and additional images.