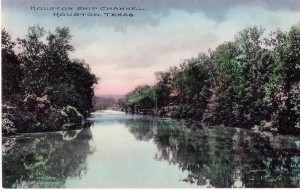 In 1836, an early advertisement entitled “The Town of Houston” indicated, “Tide water runs to this place and the lowest depth of water is about six feet.” The ad continued, “Vessels from New Orleans or New York can sail without obstacle to this place,” and it declared Houston the “head of navigation.” With this campaign, the Allen brothers presented their vision of Houston’s future rather than simply describing the present reality.

The Allen brothers’ mission to create a city where none had been before was fueled by the same philosophy that led to Houston’s long-term success: dream big, and do everything possible to realize your dreams. The realization of Houston and the Houston Ship Channel is a tale of promotion, ingenuity, and decades of dedicated effort by civic leaders. This story also demonstrates the leaders’ ability to create a coalition of local, state and national governments to fund their endeavors. 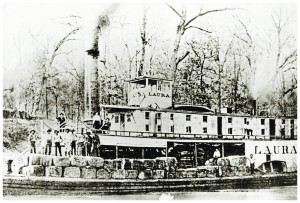 Notwithstanding the “head of navigation” declaration, Buffalo Bayou was not fully navigated to the makeshift town of Houston until January 1837 when Captain Thomas Wigg Grayson guided the Laura, a small paddlewheel steamer with a draft of over five feet, from Galveston Bay to Harrisburg, and then to Houston. In his memoir, Francis R. Lubbock describes his transfer from the Laura to a yawl that sailed past Houston’s landing site. “We backed down the bayou, and by close observations discovered a road or street laid off from water’s edge. Upon landing we found stakes and footprints, indications that we were in the town tract.”Today that area at the foot of Main Street is known as Allen’s Landing. 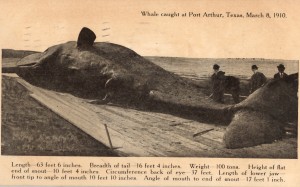 Don’t miss the surprise story of the “Port Arthur Whale” that made a special appearance at the 1910 No-Tu-Oh Festival. 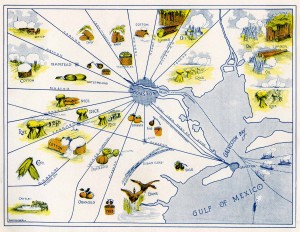 Click her to read “A Texas Tale of Logistics and Transport in the Land ‘Where 17 Railroads Meet the Sea'” by Maria G. Burns, director of the Center for Logistics & Transportation Policies in the College of Technology at the University of Houston. She serves as chair of education at the Houston Maritime Museum and is the author of Port Management and Operations.

The article is a tribute to the forerunners of the Port of Houston, the fathers of the Texas trade and transport, the ones who endured hardships and overcame great obstacles, the ones who dreamed of making Texas all the things that it is today: A blessed land, and the global capital of energy, maritime, and logistics.

What a Deep-water Channel to Houston Created
Dredged to Excellence, 100 Years on the Houston Ship Channel