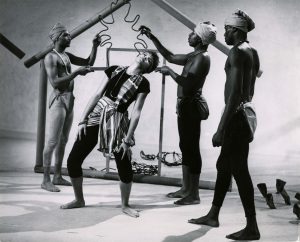 The KUHT television program People are Taught to be Different had the noble aim of improving intercultural understanding, and showing viewers that people are, at their core, much the same. Against a simple stage setting, elegant dancers interpreted moments of joy and sorrow, anger, and love across cultures, as the narrator provided cultural context to guide viewers to a better understanding of the universality of the human experience. Lessons in cultural sociology were presented in plain language and focused on the theory that an individual’s personality results from the culture in which he or she is raised.

Broadcast in 1958 just five years after KUHT-TV went on air as the country’s first noncommercial educational television station, People was distributed to educational stations nationwide. Envisioned by Dr. Henry Allen Bullock and developed by Texas Southern University and University of Houston-owned KUHT, the series featured an all-African American cast who, in twelve episodes, explored experiences common to all mankind. The program had a lofty goal – to improve “intergroup understanding by approaching universal crises such as birth, childhood, adolescence, courtship, marriage, and death by showing that different cultural groups react to these crises differently because they were taught a certain reaction by their culture.” The format, too, was innovative. By utilizing narration and modern dance Bullock and his cast aimed to show, rather than just tell, how personality develops through social teachings. Perhaps most extraordinary is that People was even produced in the 1950s.

To watch some of the People films courtesy of the University of Houston Digital Library, click the links below:

The Impact of Personalities